This is an album of dignified melodic ambience that will appeal to listeners with an appreciation of minimalist music with classical beauty and oriental restraint.

Though Robert Scott Thompson is almost ridiculously prolific (his Motets for Michelangelo was reviewed at Textura a month ago and Ghost Words two months before that), his music hardly suffers as a result. His two latest releases are both exceptional ambient recordings, with the most obvious difference between them one of structural form: Gold Flowers Bloom Mercury Petals features a dozen compositions of varying length; Mantra is a single-movement, long-form work.

That Gold Flowers Bloom Mercury Petals is split into twelve parts is, however, a tad misleading since the pieces bleed into one another and form a cohesive stylistic whole. One might instead think of the album as splendorous variations on a common theme. “Classical ambient” is the term that best describes the music, with synthetically-generated woodwinds and strings sharing sonic space with electronic whooshes, synth tones, and piano (acoustic and electric). A gauzy blanket of reverb coats the material, bolstering its epic and ethereal character. In celestial and serene tracks like “Cloud Pale and Dream Dimmed” and “Hypersigil,” synthetic strings and electronic tones join together in a slow-motion dance that moves through subtly contrasting shifts in mood during the album’s fifty-five minutes. The electrical simmer of hydro wires flows through the mysterious “Arc Lamp” and softly percussive “Chaos Magic” before the album’s most entrancing piece, “Round in Circles,” weaves drifting cascades of piano, strings, and vibes into a minimal meditation that wouldn’t sound out of place on one of Eno’s ambient recordings.

In contrast to the twelve compositions of Gold Flowers Bloom Mercury Petals, Mantra presents a single, fifty-three-minute composition. Some explanatory detail is provided that clarifies how the material was generated. Apparently the work was produced using a specialized computer program that analyzes live vocal input and generates real-time accompaniment to it based on the pitch and amplitude of the vocal sounds; the resultant composition is therefore, at least in part, the mixed result—not that the typical listener would be any the wiser in the absence of such detail. Instead, he/she would simply surrender to the album’s placid meander of delicate electronic tones, and in turn enter into a state of introspective calm that occurs far too seldom in our lives. Listening to it is equivalent to resting for an hour by an isolated country pond where only natural sounds break the stillness. Gentle winds whistle through the trees and cowbells faintly tinkle from some far-off field as insects flitter across the water’s surface and voices softly exhale. Though it’s undeniably pretty, the music is also permeated with a melancholy, even resigned, spirit that makes the recording all the more affecting. If anything, Mantra seems to grow progressively more quiet and thus more retiring as the minutes tick by, the crickets chant their collective song, and the sun slowly disappears below the horizon.

The two albums are beautiful exemplars of ambient music-making, and in both cases Thompson’s time-suspending and alchemical “sonic tinting” reaps multiple rewards.

Gold Flowers Bloom Mercury Petals is comprised of 12 tracks which flow together like a concert suite, with subtle transitions between the main works. Similar in style to the landmark releases The Silent Shore, Frontier, and Blue Day, the album provides for highly immersive listening in the best tradition of classical ambient music. Serene, flowing, richly layered music of significant beauty and refinement.

Graceful beatless ambient instrumentals. Gold Flowers Bloom Mercury Petals is a suite of interconnected compositions that flow smoothly from one to another with slight shifting transitions. The variation from track to track is subtle and at times almost imperceptible – yet each piece progresses the journey further from its origin passing into passages of fluctuating harmony and atonality, moments of gathering darkness and emergent beauty, transient lightness or deep wells of intensity. The collected compositions all benefit from an oriental sensitivity, sparsity and classically delicate touch. Many of the tracks feature flowing drone beds and swells of smooth synthetic tone either underpinning minimalist melodies or themselves embodying the focal forms. A restful oceanic heave is the most pervasive rhythmic device, rising and falling allowing the more buoyant elements to drift idly with the tides.

Gold Flowers Bloom Mercury Petals is an immersive collection of a dozen pieces that form a fluid whole with faint hints of the Far East frequently adding to the placid refinement of the album. The balance of light and darkness here has resulted in music that has an appealing meditative nature yet that avoids all of the clichés of most ‘relaxation music’.

...an album of dignified melodic ambience...

Gold Flowers Bloom Mercury Petals arrives as a jewel case package with single sheet insert. The artwork throughout features clusters of white blossom on twig tips with golden anthers emerging from golden centres. These delicate flowers are presented on bottle green backdrops wherein the breakers and foam of rolling seascapes can be faintly discerned. The elegant strokes and angles of oriental characters along with small framed flower graphics complete the design elements. On the rear cover the blooms are closest footing a timed tracklist, with website details in small type to the right. Within the only details are credits for artwork.

Gold Flowers Bloom Mercury Petals comes as the latest release from classical ambient composer Robert Scott Thompson. The album is delivered via his own Aucourant Records label and follows in the paths delineated by previous albums The Silent Shore, Frontier and Blue Day. The album holds twelve tracks that flow as a single entity via morphing transitions. The Aucourant Records website holds samples of all tracks.

CLOUD PALE AND DREAM DIMMED
The album opener unfurls with sweeping pads and sibilant percussive clacking sounds. The pervasive drifting feel that recurs throughout much of the suite is here right from the start, shifts of intensity at times seeing the music almost disperse into nothingness. Graceful string phrases waft like summer breezes, drawn out strains of scant melody silky smooth against the echoing effects that periodically shudder into earshot.

EVENING LIGHT
A gradual morph opens the second piece, the mood similar to its forerunner yet somewhat darker; a brooding drone humming below further string phrases that swell into being and fade away with unhurried regularity, like the sunshine passing behind clouds. At just over seven minutes, this is almost the longest of the twelve tracks. The ending sees the introduction of wispy air movements that flit across the transition into …

WATERS AND THE WILD
Voicelike pads and slightly brassy sounds interweave forming rather abstract patterns wherein the previous ebbing and flowing of wavelike melody persists. The serene, attractive nature of the foreground forms are in contrast to periodic builds of dissonance and occasional openings of dark space that form behind.

QUIET LANDS
An air of mystery hangs as the backdrop to Quiet Lands, brief melodic phrases of piano-like notes deep within the aural fog of the piece. The ponderous regular swaying of some of the initial passages is less obvious now – drones more constant, increasingly hypnotic.

UPON RETURN FROM DREAM
The same steady gloom from the last track continues. Emergent fluttering synthetics coming to the fore midway, echoing and spacey approaching percussion almost. Metallic and bright against the ambient shadow behind, for a while approaching cacophony, then consonant, flowing together in an intensity of movement adorned with sounds that resemble effected, muted bell-trees.

HYPERSIGIL
The mood runs onward into Hypersigil – the panoramic breadth of the synth sweeps shifting lazily into a section of elegant depth and low frequency classic beauty. Perhaps the most beautiful track thus far – deep string-like phrases moving like large shapes under water whilst sharper drones adorn the surface with meandering currents.

ARC LAMP
Arc Lamp opens with a brightness of higher tones like beams of aural light shining in graceful motion. These shiny strains gather in wavering, almost atonal structures over a faint continuance of the thematic forms from Hypersigil, here slightly lighter and with a growing weightlessness that leave the piece floating in the ether.

CHAOS MAGIC
The fleeting two minutes, twenty six seconds of this track remains without weight – echoing effects and sussurant noise enwrapped about a more sparse thematic thread. Something of the night inhabits this piece – the fizz and sizzle of the treble strains like distant insect communities announcing the darkness, the emptiness of the music like the emptiness of the night sky.

ROUND IN CIRCLES
Here a new melodic structure arises, chimes in ascending scales, gently stepping upward over hazy, drawn out string-drones. Refined and stately, this longest composition lasts for over eight minutes, the constantly rising chimes now and then emphasised with piano touches. As the conclusion approaches a gathering cloud mass of less harmonious texture replaces the scales. A steady amorphous zone of sound that passes across the transition into …

AMONG THE UNLABORING STARS
The rhythmic regularity of Round In Circles is gone – now a sonic expanse opens out. This composition is strongly textural, multiple layers moving among one another, hiss and noise inseparable from undulating tonal strands. Punctuating splashes of sound reverberate periodically, keeping the piece in motion. The finale drawing near, the layers thin out and soften allowing the air itself to breathe into dominance and it’s over.

This is an album of dignified melodic ambience that will appeal to listeners with an appreciation of minimalist music with classical beauty and oriental restraint. Give the music a listen at the Aucourant Records website and decide for yourself.

It should not really come as a surprise, that RST yet again has created a work that is sensual and rich, this time as yet another long-form composition, that is more, dare I say it, symphonic in its structure, with huge waves of sound crashing upon a beach of pre-determined form. Did that sound pretentious? Yep, it did, but that is my fault, not RSTs. Suffice to say, the music comes in waves of warm sensuality, where a well-structured uniformity clashes with sporadic bursts of dramatic change. For all you RST-fans out there, I can only say: get this CD. Now.

The twelve pieces on this album are are shorter than perhaps usual, when compared to Thompson’s other albums. (The longest piece here is 8:14, and the shortest 1:43.)

As the album’s title suggests, these pieces are most often delicate, minimalistic soundscapes—occasionally with mysterious echoing sounds drifting past. One piece typically flows seamlessly into the next, but with a consistent mood throughout.

Not all of the pieces are simply light and delicate ‘ear candy.’ (See ‘Arc Lamp,’ for example, which has a somewhat sharper edge to it.) 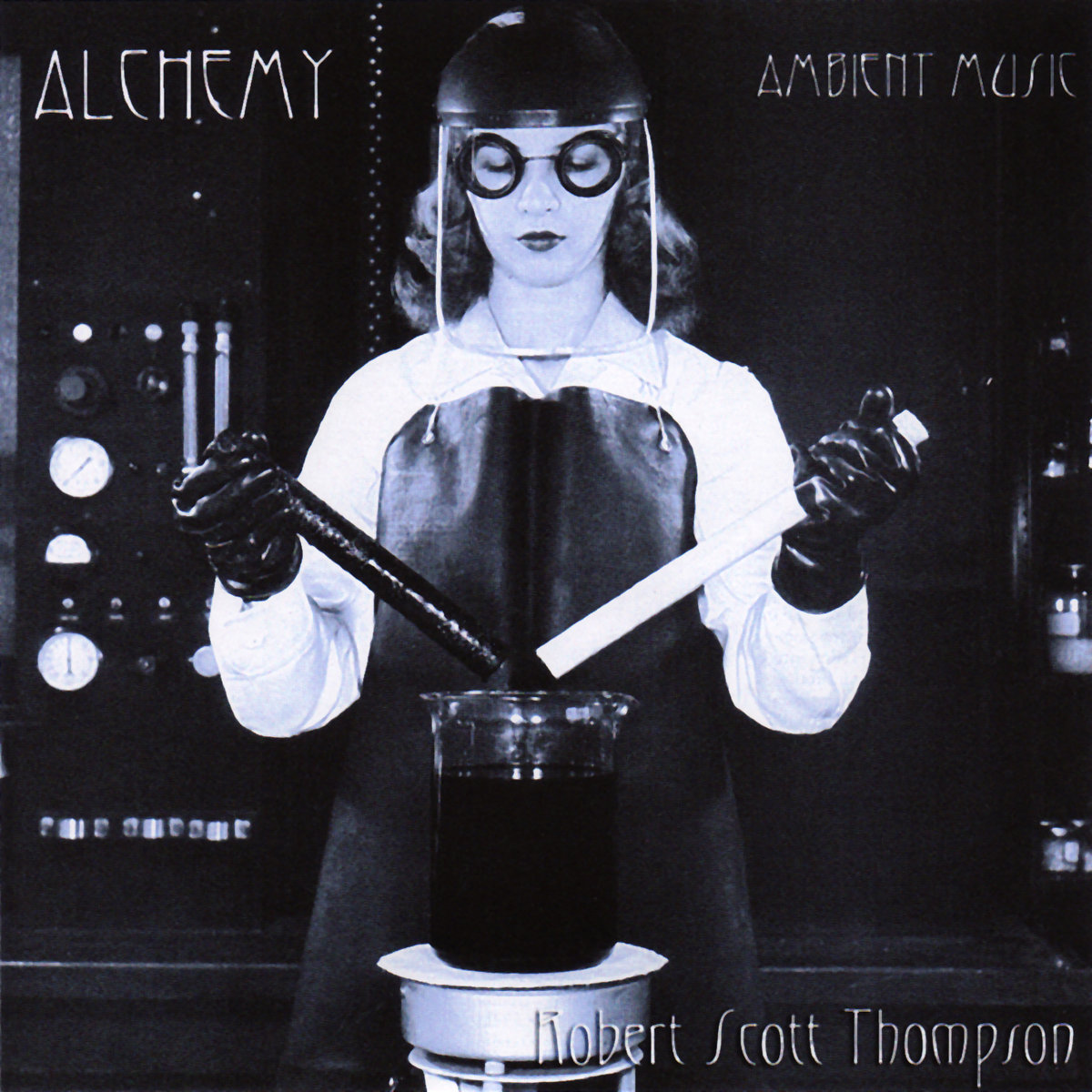 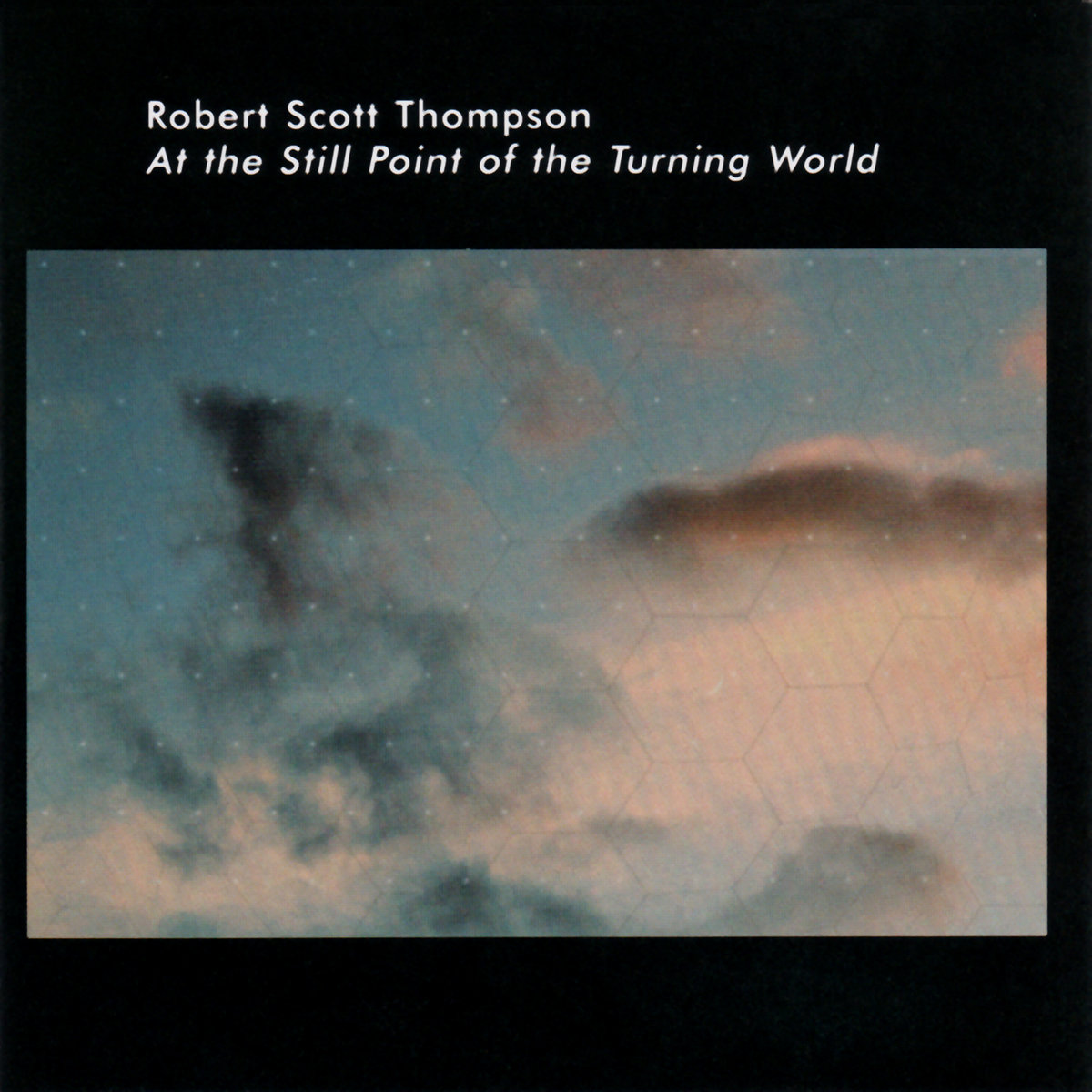 At the Still Point of the Turning World 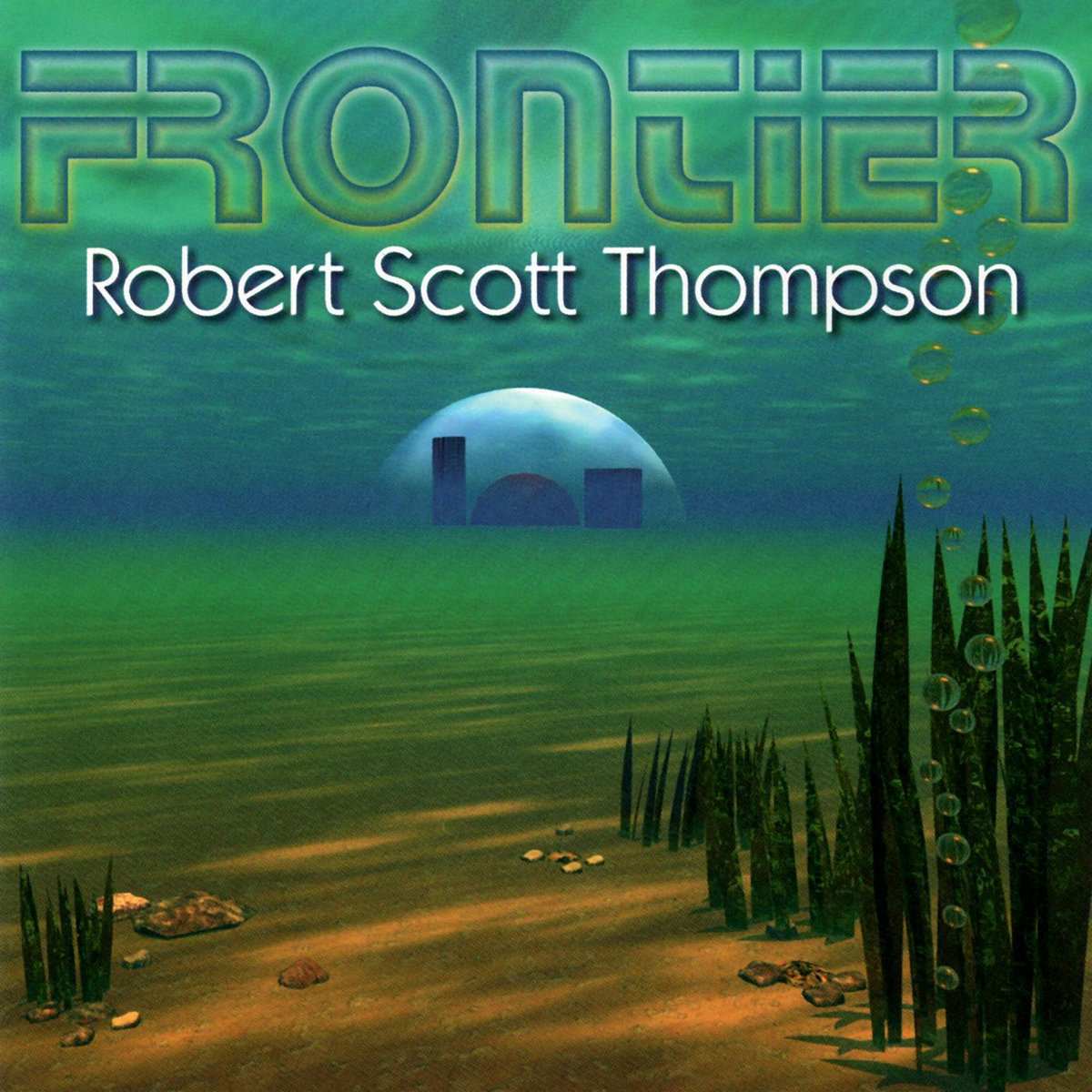 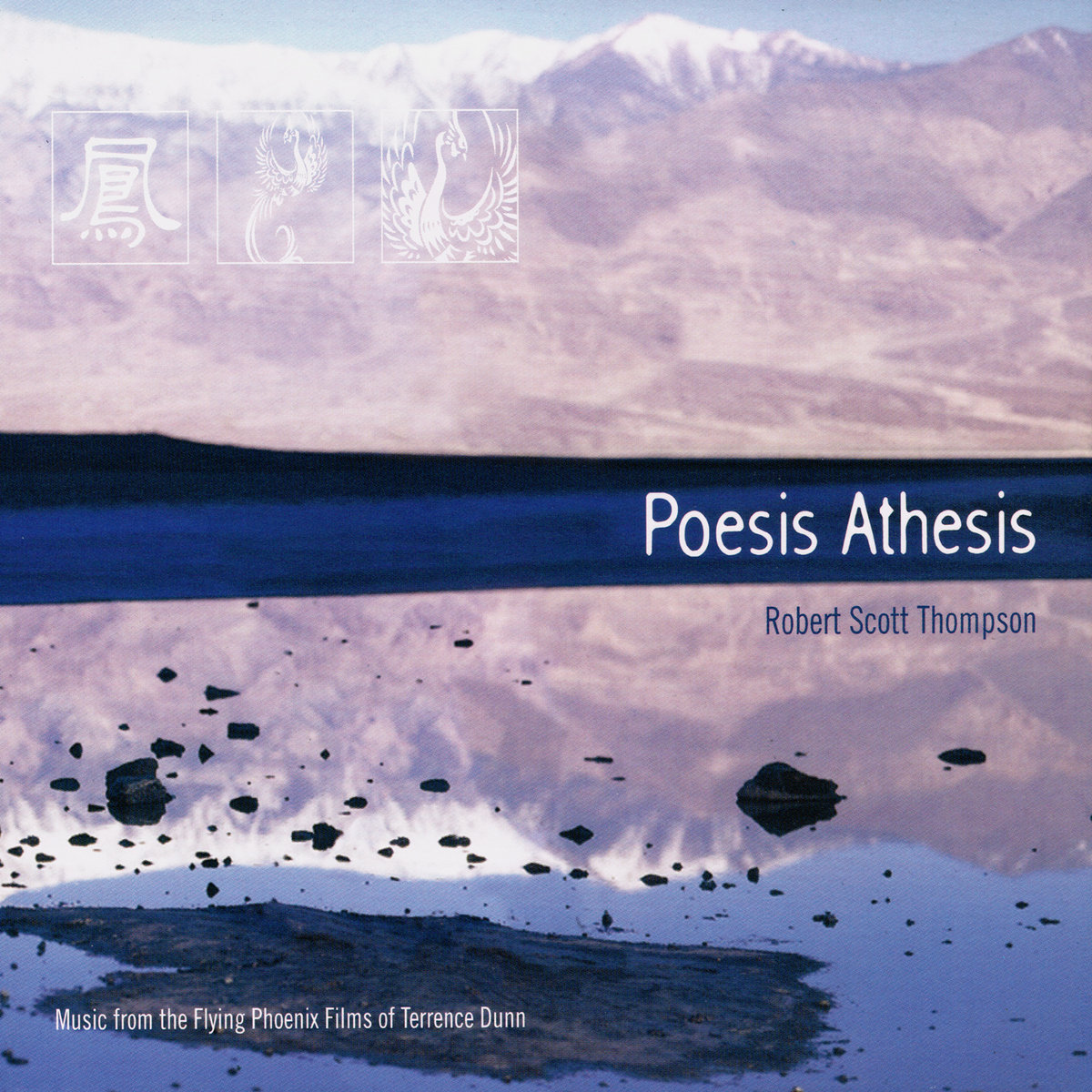